Nonlinear regression is a regression technique in which a nonlinear mathematical model is used to describe the relationship between two variables (Glantz & Slinker, 2001).

To find the model's parameters, MedCalc uses the Levenberg-Marquardt iterative procedure (Press et al., 2007) that requires the user to supply initial estimates or best guesses of the parameters. 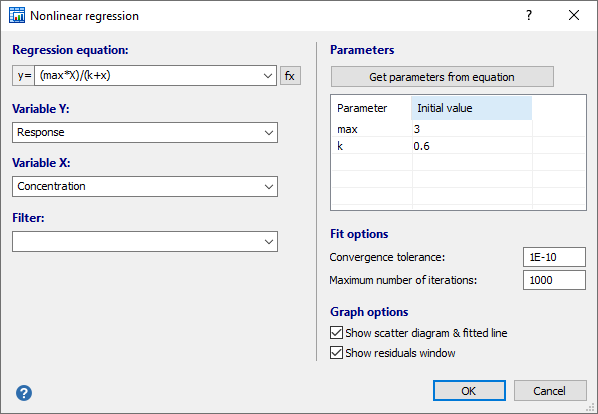 The nonlinear regression equation must include the symbol x, which refers to the independent variable that is selected in a different input box (see below). The different parameters can be represented by single characters a .. z, excluding the characters x and y. The parameters can also be represented by more meaningful names such as for example 'slope'. Parameter names must not be equal to any variable name in the spreadsheet, but just like variables, parameter names cannot include spaces, nor the following characters: - + / * = < > # & $ | ^ : , ; . ( ) ' " [ ] { }. In addition, parameter names should not start with a number and must be different from reserved words such as TRUE, FALSE, ROW and COLUMN.