The probit regression equation has the form:

Where X is the (possibly log-transformed) dose variable and probit(p) is the value of the inverse standard normal cumulative distribution function Φ-1 corresponding with a probability p:

Probit(p) can be transformed to a probability p using the standard normal cumulative distribution function Φ:

MedCalc fits the regression coefficients a and b using the method of maximum likelihood.

You can enter the data in binary format or in grouped format.

In the binary format, you have 2 variables, one variable for the dose (concentration) and one for the binary response.

For each single measurement, there is a row with the dose and the response, which is coded 0 (no response) and 1 (response). 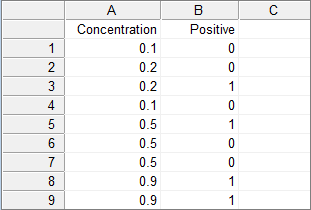 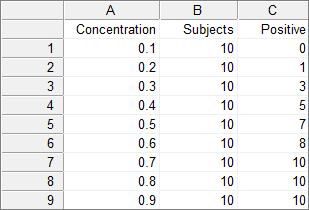 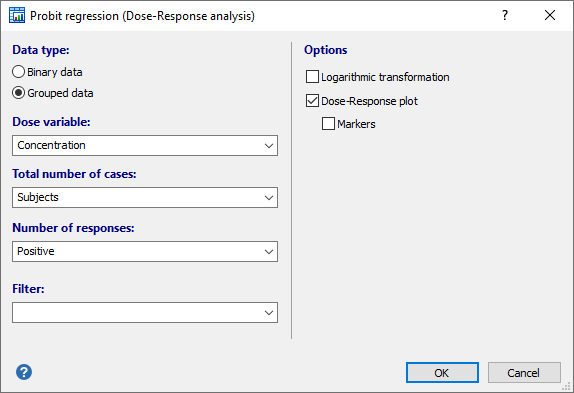 Select the option corresponding to the way you have entered the data: binary or grouped (see above).

Variables in case of binary data

Variables in case of grouped data 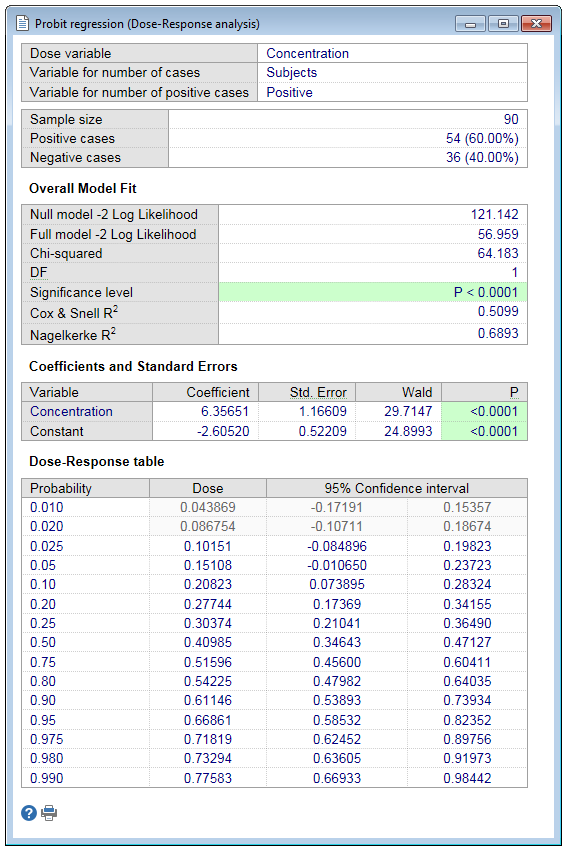 Sample size and cases with negative and positive outcome

First the program gives sample size and the number and proportion of cases with and without response.

The null model −2 Log Likelihood is given by −2 * ln(L0) where L0 is the likelihood of obtaining the observations in the "null" model, a model without the dose variable.

The full model −2 Log Likelihood is given by −2 * ln(L) where L is the likelihood of obtaining the observations with the dose variable incorporated in the model.

The difference of these two yields a Chi-Squared statistic which is a measure of how well the dose variable affects the response variable.

The Wald statistic is the regression coefficient divided by its standard error squared: (b/SE)2.

When you have selected logarithmic transformation of the dose variable, then a and b are in fact the coefficients of the regression equation:

Use of the fitted equation

The predicted probability of a positive response can be calculated using the regression equation.

When the regression equation is for example:

then for a Dose of 0.500 probit(p) equals 0.57. Probit(p) can be transformed to p by the MedCalc spreadsheet function NORMSDIST(z) or the equivalent Excel function.

Alternatively, you can use the following table.

A probability p can be transformed to Probit(p) using the table above or using the MedCalc spreadsheet function NORMSINV(p) or the equivalent Excel function. For a probability p=0.5 you find in the table that probit(p)=0. When the regression equation is

This table lists a series of Probabilities with corresponding Dose, with a 95% confidence interval for the dose (Finney, 1947).

Values in light gray text color are dose values that fall outside the observed range of the dose variable.

When you have selected logarithmic transformation of the dose variable, MedCalc will backtransform the results and display the dose variable on its original scale in the Dose-Response table.

This graph shows the probabilities, ranging from 0 to 1, and the corresponding dose. Two additional curves represent the 95% confidence interval for the dose. The dose and 95% confidence interval, corresponding with a particular probability, are taken from a horizontal line at that probability level. Originally published in 1947, this classic study by D. J. Finney was the first to examine and explain a branch of statistical method widely used in connection with the biological assay of insecticides, fungicides, drugs, vitamins, etc. It standardized the computations and terminology and made its use easier for a biologist without statistical expertise, whilst also outlining the underlying mathematical theory. Finney had made several important contributions to the method in the past, and his own results are also included.