Regression analysis is a statistical method used to describe the relationship between two variables and to predict one variable from another (if you know one variable, then how well can you predict a second variable?).

Whereas for correlation the two variables need to have a Normal distribution, this is not a requirement for regression analysis. The variable X does not need to be a random sample with a Normal distribution (the values for X can be chosen by the experimenter). However, the variability of Y should be the same at each level of X. 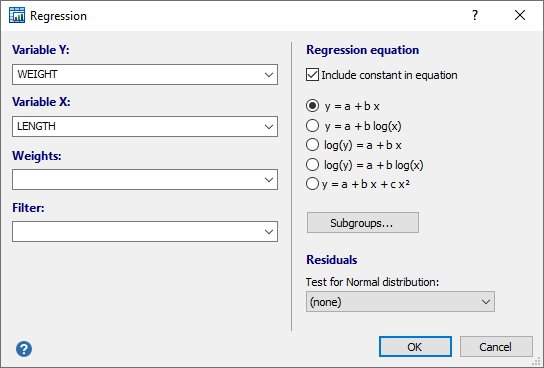 By default the option Include constant in equation is selected. This is the recommended option that will result in ordinary least-squares regression. When you need regression through the origin (no constant a in the equation), you can uncheck this option (an example of when this is appropriate is given in Eisenhauer, 2003).

The following statistics will be displayed in the results window: 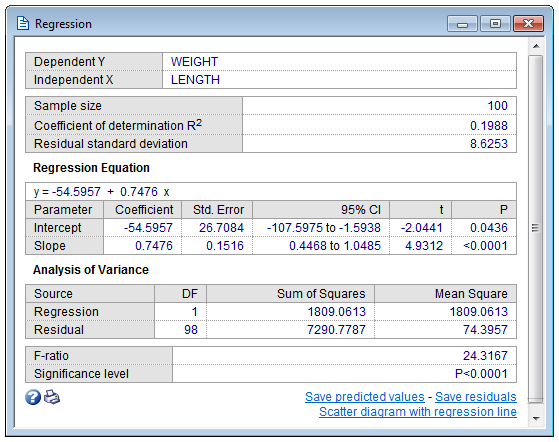 Coefficient of determination R2: this is the proportion of the variation in the dependent variable explained by the regression model, and is a measure of the goodness of fit of the model. It can range from 0 to 1, and is calculated as follows:

where Y are the observed values for the dependent variable,

The residual standard deviation is sometimes called the Standard error of estimate (Spiegel, 1961).

The equation of the regression curve: the selected equation with the calculated values for a and b (and for a parabola a third coefficient c). E.g. Y = a + b X

Next, the standard errors are given for the intercept (a) and the slope (b), followed by the t-value and the P-value for the hypothesis that these coefficients are equal to 0. If the P-values are low (e.g. less than 0.05), then you can conclude that the coefficients are different from 0.

Analysis of variance: the analysis of variance table divides the total variation in the dependent variable into two components, one which can be attributed to the regression model (labeled Regression) and one which cannot (labelled Residual). If the significance level for the F-test is small (less than 0.05), then the hypothesis that there is no (linear) relationship can be rejected.

When you have selected a subgroup in the regression dialog box MedCalc will automatically compare the slopes and intercepts of the regression equation obtained in the different subgroups.

This comparison is performed when

The results window then includes the following table: 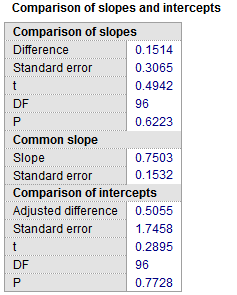 The calculations are performed according to Armitage et al., 2002.

First the difference between the slopes is reported with its standard error, t-statistic, degrees of freedom and associated P-value. If P is not less than 0.05 the slopes do not differ significantly and the regression lines are parallel. If P is less than 0.05 then the regression lines are not parallel and the comparison of intercepts below is not valid.

Next a common slope is calculated, which is used to calculate the adjusted difference between the intercepts.

When there are more than 2 subgroups, ANCOVA can be used to compare slopes and intercepts.

Next, below "Pairwise comparisons", you find the P-values for the differences between the intercepts.

Linear regression analysis assumes that the residuals (the differences between the observations and the estimated values) follow a Normal distribution. This assumption can be evaluated with a formal test, or by means of graphical methods.

If the analysis shows that the relationship between the two variables is too weak to be of practical help, then there is little point in quoting the equation of the fitted line or curve. If you give the equation, you also report the standard error of the slope, together with the corresponding P-value. Also the residual standard deviation should be reported (Altman, 1980). The number of decimal places of the regression coefficients should correspond to the precision of the raw data.

The accompanying scatter diagram should include the fitted regression line when this is appropriate. This figure can also include the 95% confidence interval, or the 95% prediction interval, which can be more informative, or both. The legend of the figure must clearly identify the interval that is represented.