A meta-analysis integrates the quantitative findings from separate but similar studies and provides a numerical estimate of the overall effect of interest (Petrie et al., 2003).

Different weights are assigned to the different studies for calculating the summary or pooled effect. The weighing is related with the inverse of the standard error (and therefore indirectly to the sample size) reported in the studies. Studies with smaller standard error and larger sample size are given more weight in the calculation of the pooled effect size.

The effect of interest can be:

The agreement or disagreement between the studies is examined using different measures of heterogeneity.

Under the fixed effects model, it is assumed that the studies share a common true effect, and the summary effect is an estimate of the common effect size.

Under the random effects model the true effects in the studies are assumed to vary between studies and the summary effect is the weighted average of the effects reported in the different studies (Borenstein et al., 2009).

Q is the weighted sum of squares on a standardized scale. It is reported with a P value with low P-values indicating presence of heterogeneity. This test however is known to have low power to detect heterogeneity and it is suggested to use a value of 0.10 as a cut-off for significance (Higgins et al., 2003). Conversely, Q has too much power as a test of heterogeneity if the number of studies is large.

I2 is the percentage of observed total variation across studies that is due to real heterogeneity rather than chance. It is calculated as I2 = 100% x (Q - df)/Q, where Q is Cochran's heterogeneity statistic and df the degrees of freedom. Negative values of I2 are put equal to zero so that I2 lies between 0% and 100%. A value of 0% indicates no observed heterogeneity, and larger values show increasing heterogeneity (Higgins et al., 2003).

Egger's test is a test for the Y intercept = 0 from a linear regression of normalized effect estimate (estimate divided by its standard error) against precision (reciprocal of the standard error of the estimate).

For both tests, when the (two-sided) P-value is low, this is an indication of publication bias.

Note that the power of both methods to detect bias will be low with small numbers of studies. 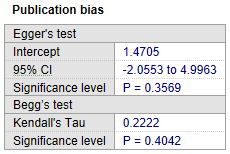 The results of the different studies, with 95% CI, and the overall effect (under the fixed and random effects model) with 95% CI are illustrated in a graph called "forest plot", for example: 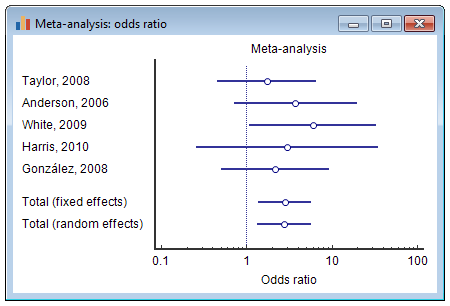 In this example the markers representing the effect size all have the same size. Optionally, the marker size may vary in size according to the weights assigned to the different studies. In addition, the pooled effects can be represented using a diamond. The location of the diamond represents the estimated effect size and the width of the diamond reflects the precision of the estimate, for example: 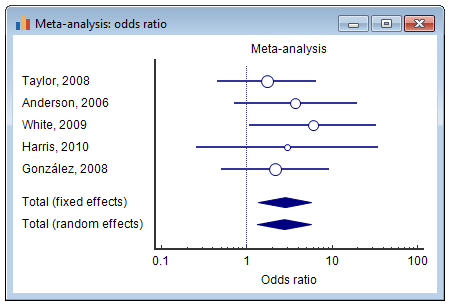 A funnel plot (Egger et al., 1997) is a graphical tool for detecting bias in meta-analysis.

In a funnel plot treatment effect is plotted on the horizontal axis and MedCalc plots the standard error on the vertical axis (Sterne & Egger, 2001).

Publication bias results in asymmetry of the funnel plot. If publication bias is present, the smaller studies will show the larger effects. See Sterne et al. (2011) for interpreting funnel plot asymmetry. The funnel plot may not always be a reliable tool, in particular when the number of studies included in the analysis is small.