A meta-analysis integrates the quantitative findings from separate but similar studies and provides a numerical estimate of the overall effect of interest (Petrie et al., 2003).

It is advised to use one of the following specific meta-analysis procedures for continuous and dichotomous outcome data:

If none of the above procedures is applicable or suitable, you can use the "generic inverse variance method" procedure. In this procedure estimates and their standard errors are entered directly into MedCalc. For ratio measures of intervention effect, the data should be entered as natural logarithms (for example as a log Hazard ratio and the standard error of the log Hazard ratio). 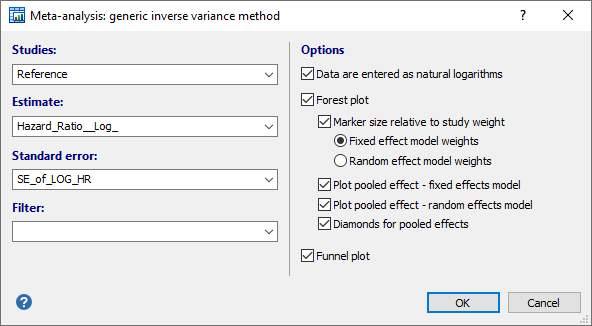 Filter: a filter to include only a selected subgroup of studies in the meta-analysis. The program lists the results of the individual studies included in the meta-analysis: the estimate and 95% confidence interval.

The pooled value for the estimate, with 95% CI, is given both for the Fixed effects model and the Random effects model.

Under the fixed effects model, it is assumed that the studies share a common true effect, and the summary effect is an estimate of the common effect size.

Under the random effects model (DerSimonian and Laird) the true effects in the studies are assumed to vary between studies and the summary effect is the weighted average of the effects reported in the different studies (Borenstein et al., 2009).

The Forest plot shows the estimate (with 95% CI) found in the different studies included in the meta-analysis, and the overall effect with 95% CI. 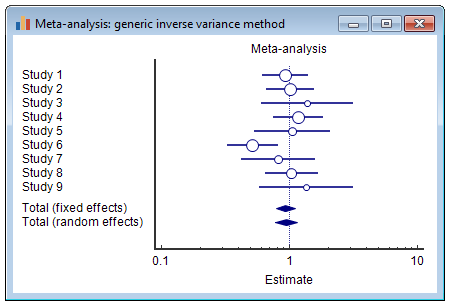 A funnel plot is a graphical tool for detecting bias in meta-analysis. See Meta-analysis: introduction. 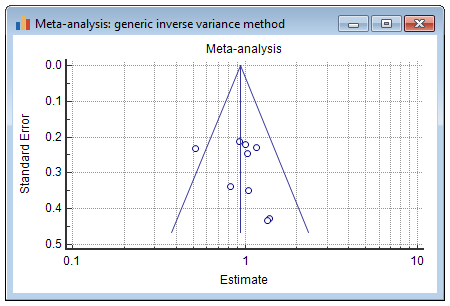