Comparison of partial areas under the ROC curve

When comparing 2 ROC curves, it may occur that the two Areas under the ROC curve (AUC) are equal, but one has a higher sensitivity than the other in a specificity range. The example shows two crossing ROC curves with equal total AUC. However, for the clinically important range (specificity higher than 80%), the sensitivity of test A is clearly higher than of test B (adapted from Obuchowski, 2006).

See Partial area under ROC curve for detailed information on the calculation and interpretation of partial areas under the ROC curve. 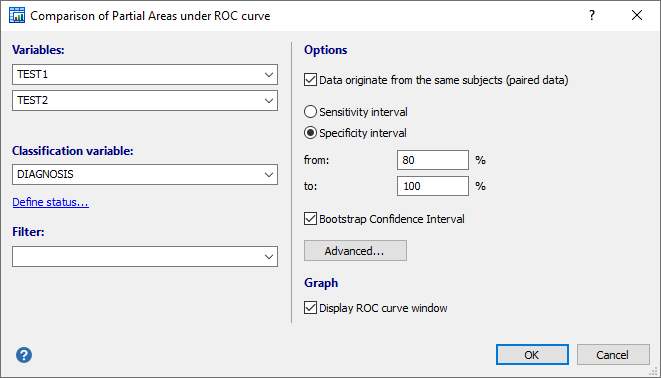 The following report is displayed in case of a paired design: First MedCalc shows the parameters of the analysis.

Next, the following are reported for the two variables:

The report for independent samples is somewhat different, but essentially contains the same statistics: Comparison of the two partial areas

The ROC curve and partial areas are displayed in a separate window: 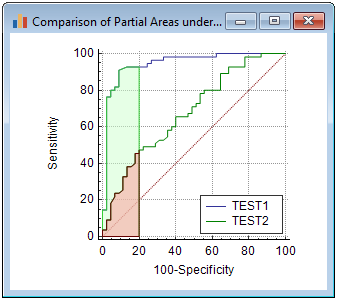 Statistical Methods in Diagnostic Medicine provides a comprehensive approach to the topic, guiding readers through the necessary practices for understanding these studies and generalizing the results to patient populations.