To to enter the variable name LENGTH in the top row of column A, you first position the mouse pointer on this cell, and click the left mouse button. The cell pointer is now located in this cell, and you can type the variable's name on the keyboard. Next, you press the

key to actually store the name in the computer's memory and move the cell pointer to cell A1. You can now enter the first value 171 for the variable LENGTH in this cell, followed by pressing the

key to go to the next cell.

Change the contents of a cell

When you want to change or edit the content of a cell, place the cell pointer on this cell and press function key F2. You can now move the cursor in the cell's text by means of the arrow keys

, and make the necessary changes. After you have made the changes, press the Enter key or move the cell pointer to another cell to store the new cell content in memory.

The program automatically formats the numbers that you enter according to the number of decimals selected in the Format spreadsheet dialog box. 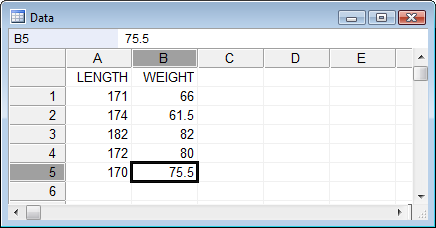 If you want a different number of decimals for a particular column, then click Spreadsheet on the Format menu and enter the new number of decimals on the Column tab. In this dialog box you can also specify a different width for the column. You can also specify that a particular column only contains text data (option "Text format"). The latter option is particularly useful when the column contains text data that should not be interpreted as a number, e.g. dates: 05/07/1956 must be displayed as such, not as 0.0003652 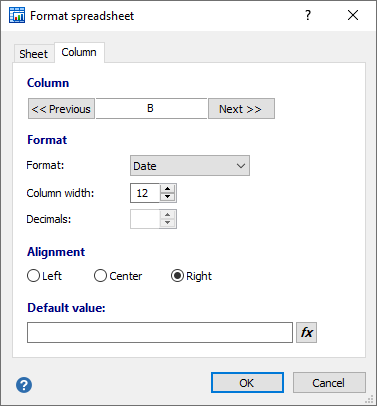 Categorical or qualitative data may either be entered as numbers or as text strings. A text string consists of one or more alphanumeric characters, placed in quotation marks. The program will consider every expression that cannot be interpreted as a number to be a string, even if it is not placed between quotation marks, e.g. "Green", yellow, "10". Distinction can be made between Nominal and Ordinal data:

A variable that can only have 2 values is also called a dichotomous variable, for example pregnant/not pregnant, male/female.

A numerical variable consists of numbers, for example 0, 25 or 3.258, or expressions that can be interpreted as a number, e.g. LOG(25) or SQRT(VAR1) where VAR1 is a variable's name containing numerical data.

Numerical data may either be continuous or discrete.

Continuous data: numbers that can theoretically assume any value between two given values; usually measurements, for example: the height of a person.

Discrete data: data that are not continuous (and may have a limited number of values), usually counts, for example: the number of children in a family.

You can easily convert a numerical variable into a categorical variable using the spreadsheet function CATEGORISE or IF (If-then-else function).

How to enter dates