If you have the following data in the spreadsheet: 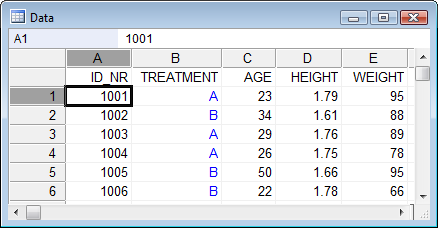 then ID_NR, TREATMENT, AGE, HEIGHT and WEIGHT are valid variables.

When performing statistical analyses or creating graphs, you can enter a combination of variables as a variable in the dialog panels:

In this example, the variables WEIGHT and HEIGHT are combined into a new variable (the Body Mass Index) with the formula WEIGHT/(HEIGHT*HEIGHT). Any of the following operators can be used to combine variables (in order of precedence):

As shown in the example, brackets can be used to change the operators' precedence.

3. Transformation of a variable