Creates a classification table, from raw data in the spreadsheet, for two observers and calculates an inter-rater agreement statistic (Kappa) to evaluate the agreement between two classifications on ordinal or nominal scales.

This test is performed on the raw data in the spreadsheet. If you have the data already organised in a table, you can use the Inter-rater agreement command in the Tests menu. 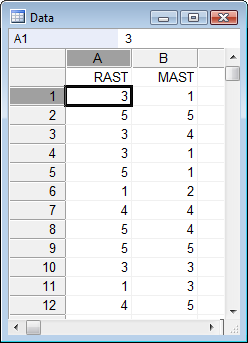 In the Inter-rater agreement dialog box, two discrete variables with the classification data from the two observers must be identified. Classification data may either be numeric or alphanumeric (string) values.

Kappa does not take into account the degree of disagreement between observers and all disagreement is treated equally as total disagreement. Therefore when the categories are ordered, it is preferable to use Weighted Kappa (Cohen 1968), and assign different weights wi to subjects for whom the raters differ by i categories, so that different levels of agreement can contribute to the value of Kappa.

MedCalc offers two sets of weights, called linear and quadratic. In the linear set, if there are k categories, the weights are calculated as follows:

and in the quadratic set: 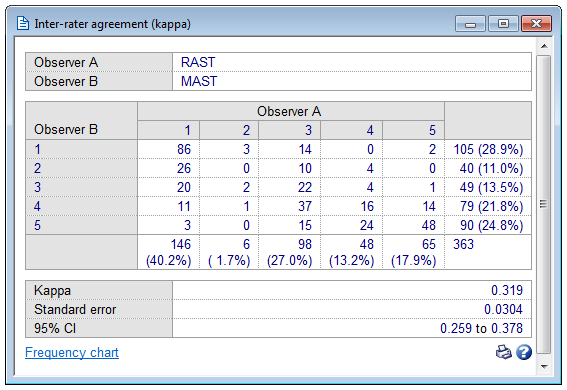 The standard errors reported by MedCalc are the appropriate standard errors for testing the hypothesis that the underlying value of weighted kappa is equal to a prespecified value other than zero (Fleiss et al., 2003).