Use Inter-rater agreement to evaluate the agreement between two classifications (nominal or ordinal scales).

If the raw data are available in the spreadsheet, use Inter-rater agreement in the Statistics menu to create the classification table and calculate Kappa (Cohen 1960; Cohen 1968; Fleiss et al., 2003).

Agreement is quantified by the Kappa (K) statistic:

In the dialog form you can enter the two classification systems in a 6x6 frequency table. 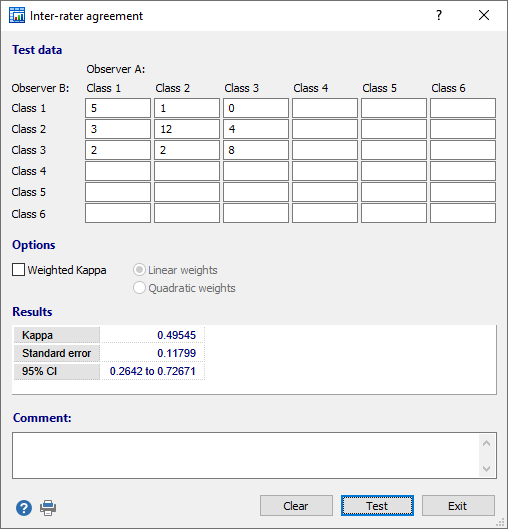 MedCalc calculates the value for Kappa with its standard Error and 95% confidence interval (CI).

The Standard errors reported by MedCalc are the appropriate standard errors for testing the hypothesis that the underlying value of weighted kappa is equal to a prespecified value other than zero (Fleiss et al., 2003).