The Bland-Altman plot, or difference plot, is a graphical method to compare two measurements techniques (Bland & Altman, 1986 and 1999). In this graphical method the differences (or alternatively the ratios) between the two techniques are plotted against the averages of the two techniques. Alternatively (Krouwer, 2008) the differences can be plotted against one of the two methods, if this method is a reference or "gold standard" method. (*) or ratios when this option is selected.

It is recommended (Stöckl et al., 2004; Abu-Arafeh et al., 2016) to enter a value for the "Maximum allowed difference between methods" and select the option "95% CI of limits of agreement".

How to define the Maximum allowed difference

A third approach might be to base acceptance limits on clinical requirements. If the observed random differences are too small to influence diagnosis and treatment, these differences may be acceptable, and the two laboratory methods can be considered to be in agreement.

MedCalc creates a graph and a report. 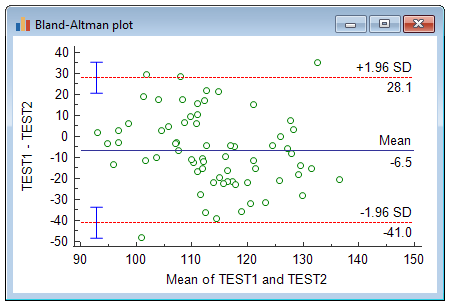 The graph displays a scatter diagram of the differences plotted against the averages of the two measurements. Horizontal lines are drawn at the mean difference, and at the limits of agreement.

The limits of agreement (LoA) are defined as the mean difference ± 1.96 SD of differences. If these limits do not exceed the maximum allowed difference between methods Δ (the differences within mean ± 1.96 SD are not clinically important), the two methods are considered to be in agreement and may be used interchangeably. 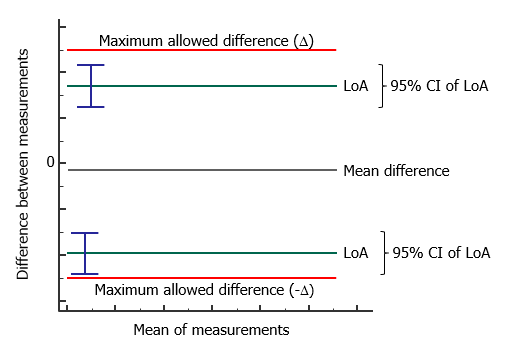 The Bland-Altman plot is useful to reveal a relationship between the differences and the magnitude of measurements (examples 1 & 2), to look for any systematic bias (example 3) and to identify possible outliers. If there is a consistent bias, it can be adjusted for by subtracting the mean difference from the new method.

See Video: How to format confidence intervals in Bland-Altman plots.

The report contains the exact values and confidence intervals for average difference and the limits of agreement. Some typical situations are shown in the following examples. 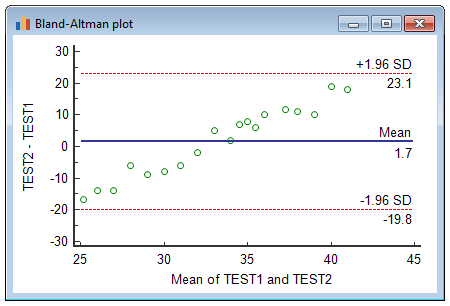 Example 1: Case of a proportional error. 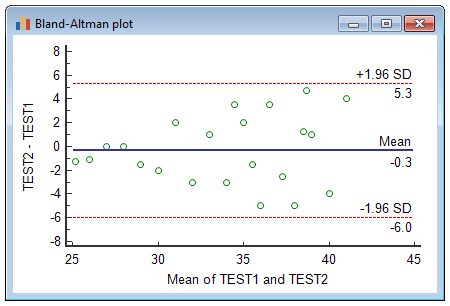 Example 2: Case where the variation of at least one method depends strongly on the magnitude of measurements.

The Bland-Altman plot may also be used to assess the repeatability of a method by comparing repeated measurements using one single method on a series of subjects. The graph can then also be used to check whether the variability or precision of a method is related to the size of the characteristic being measured.

Since for the repeated measurements the same method is used, the mean difference should be zero. Therefore the Coefficient of Repeatability (CR) can be calculated as 1.96 (or 2) times the standard deviation of the differences between the two measurements (d2 and d1) (Bland & Altman, 1986):

The 95% confidence interval for the Coefficient of Repeatability is calculated according to Barnhart & Barborial, 2009.

To obtain this coefficient in MedCalc you

The coefficient of repeatability is not reported when you have selected the "Plot ratios" method.