Create a Bland-Altman plot for method comparison when there is more than one measurement per subject with each laboratory method.

The Bland-Altman plot (Bland & Altman, 1986, 1999, 2007), or difference plot, is a graphical method to compare two measurements techniques. In this graphical method the differences (or alternatively the ratios) between the two techniques are plotted against the averages of the two techniques. Alternatively (Krouwer, 2008) the differences can be plotted against one of the two methods, if this method is a reference or "gold standard" method.

The plot is useful to reveal a relationship between the differences and the averages, to look for any systematic biases and to identify possible outliers.

This procedure requires that you have your data organized like in the following example (data from Bland & Altman, 2007): 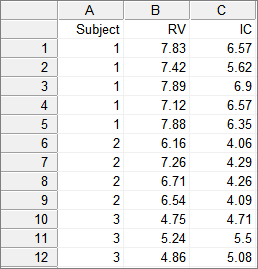 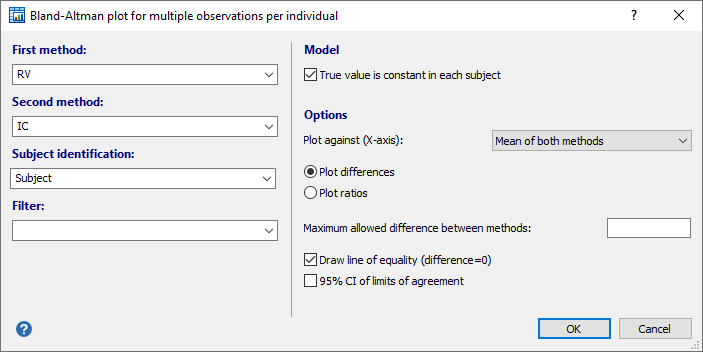 In the alternative model, where the True value varies, there is one marker for each observation pair.

The calculations are performed as described by Zou (2013). For the estimation of the confidence intervals of the limits of agreement, the MOVER method is used (Zou, 2013).

MedCalc creates a graph and a report.

This is the graph in the True value is constant in each subject model: 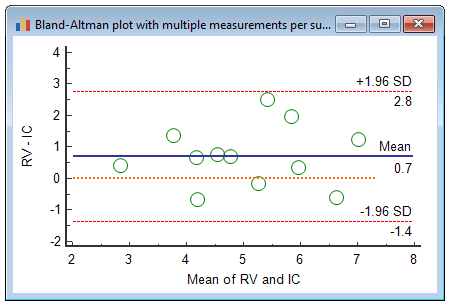 In the alternative model, where the True value varies, there is one marker for each observation pair: 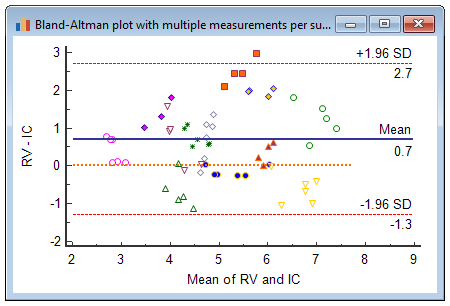 The report contains the exact values for average difference and the limits of agreement with their confidence intervals.