The problem of heteroscedasticity

Neter et al. (1996). suggest the following process for estimating the regression coefficients in the presence of heteroscedasticity:

How to do this automatically

MedCalc will perform these steps automatically when you select the dummy variable "*** AutoWeight 1/SD^2 ***" for "Weights" in the dialog boxes for regression.

How to perform each step in MedCalc

If you would like to have more control over the process, perhaps because you require some modifications of one or more steps, you can perform each of these steps using Weighted regression and other tools available in MedCalc.

This process is described below in detail.

The data for this example are available in the MedCalc sample files folder, file "Weighted regression (Neter).mc1". This file contains Age and Diastolic blood pressure (DBP) data collected on 54 subjects. 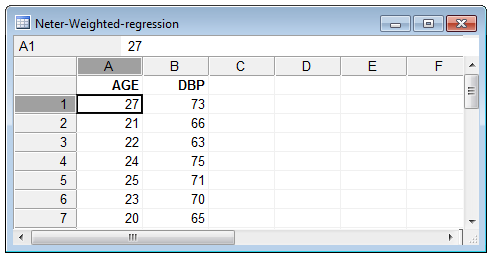 Step 1. Fit the regression model by unweighted least squares and analyze the residuals

We click Regression on the Statistics menu and complete the dialog box as follows. 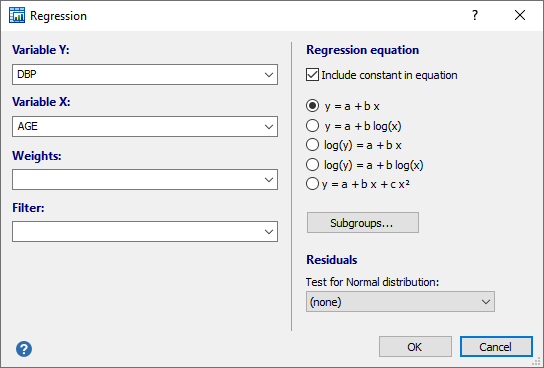 We do not select a variable for Weights because in this first step we perform ordinary unweighted least squares regression. 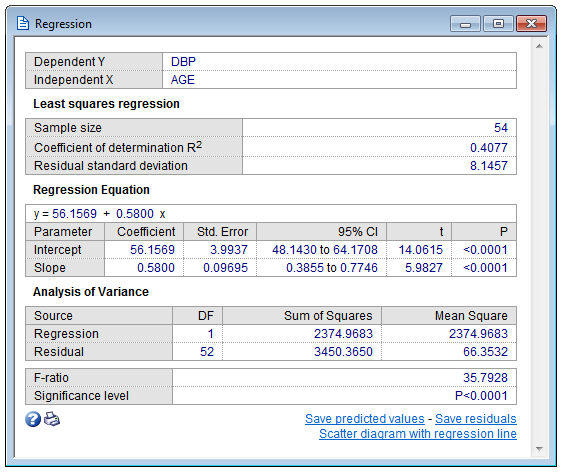 In the results window, we click the hyperlink "Save residuals" to save the residuals in a new column of the spreadsheet.

Residuals are the differences between the observed values of the dependent variable DBP and the values calculated using the regression equation. 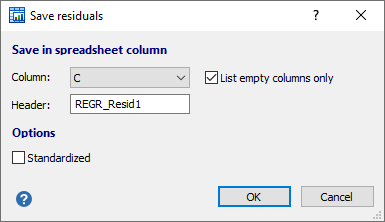 This will create a new column in the spreadsheet containing the residuals (variable "REGR_Resid1"): 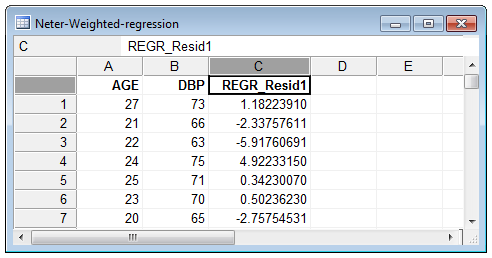 Step 2. Estimate the variance function or the standard deviation function

We click Regression on the Statistics menu and complete the dialog box as follows: 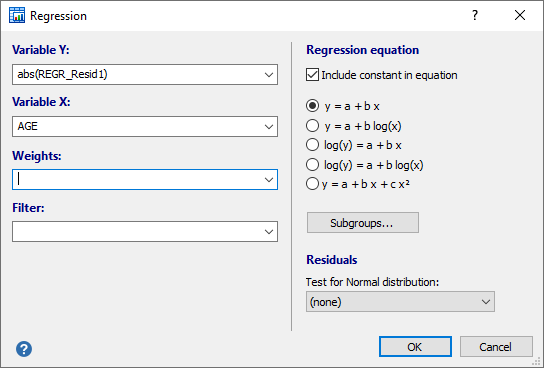 For Variable Y, we first select the new variable "REGR_Resid1" and next edit the selection and change the variable into "abs(REGR_Resid1)". 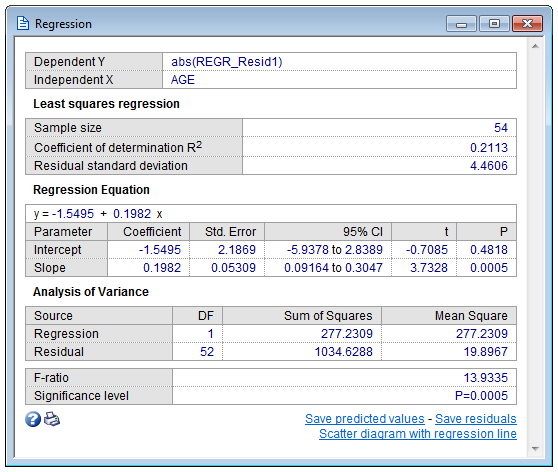 Step 3. Use the fitted values from the estimated variance or standard deviation function to obtain the weights 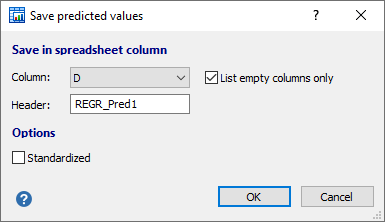 This will create a new column in the spreadsheet containing the predicted (or estimated) values of the standard deviation (variable "REGR_Pred1"): Finally, we can build our weighted regression model.

We click Regression on the Statistics menu and complete the dialog box as follows. 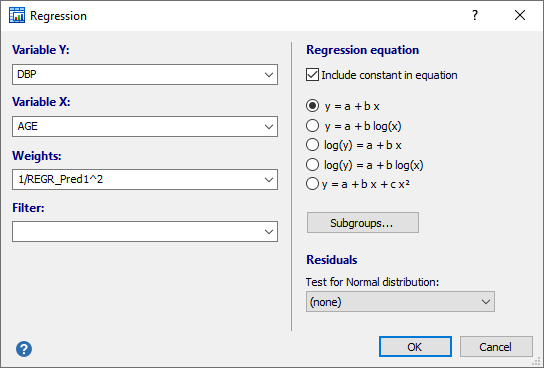 For Weights, we first select the new variable "REGR_Pred1" and next edit the selection and change the variable into "1/REGR_Pred1^2" (we could also use "1/(REGR_Pred1*REGR_Pred1)" or "1/Power(REGR_Pred1,2)". The final (weighted) regression equation is

which is not much different from the original (unweighted) regression equation

However, the standard errors of the regression coefficients are smaller, resulting in more narower confidence intervals.

Linear statistical models for regression, analysis of variance, and experimental design are widely used today in business administration, economics, engineering, and the social, health, and biological sciences. Successful applications of these models require a sound understanding of both the underlying theory and the practical problems that are encountered in using the models in real-life situations. While Applied linear Statistical Models is basically an applied book, it seeks to blend theory and applications effectively, avoiding the extremes of presenting theory in isolation and of giving elements of applications without the needed understanding of the theoretical foundations.