One-way analysis of variance is used to test the difference between the means of several subgroups of a variable (multiple testing).

The following figure illustrates how data need to be entered. For ANOVA, you need one continuous variable (concentration) and one qualitative variable (grade). The data for each case are entered on one row of the spreadsheet.

The qualitative factor may either be character or numeric codes. These codes are used to break-up the data into several subgroups for the ANOVA procedure, to calculate the Between groups and Within groups variation. 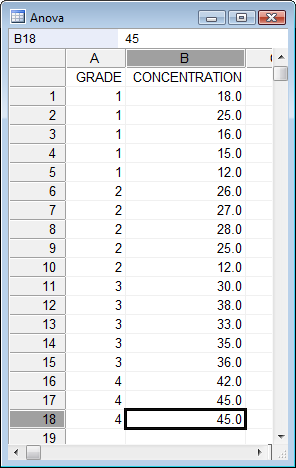 For Data, select a continuous variable, and for Factor codes the qualitative factor. Levene's Test for Equality of Variances

Prior to the ANOVA test, Levene's Test for Equality of Variances is performed. If the Levene test is positive (P<0.05) then the variances in the different groups are different (the groups are not homogeneous) and you may need to apply a logarithmic transformation to the data, or use a non-parametric statistic.

The results of the ANOVA are presented in an ANOVA table, followed by the F statistic and associated P value. If the P value is less than 0.05 (or another preselected significance level), then you can accept the hypothesis that the means of at least two of the subgroups differ significantly.

If the ANOVA test is positive (P less than the selected significance level) then MedCalc performs a post hoc test (using either Student-Newman-Keuls', Tukey-Kramer's or Scheffé's method) for pairwise comparison of subgroups.

If you selected the Logarithmic transformation option, the program performs the calculations on the logarithms of the dependent variable, but the different means are back-transformed and reported as the geometric means.

ANOVA analysis assumes that the residuals (the differences between the observations and the estimated values) follow a Normal distribution. This assumption can be evaluated with a formal test, or by means of graphical methods.

For a graphical representation of this test, refer to Multiple comparison graphs.