Fills an entire column in the spreadsheet, or a range of rows in a column, with a value or formula. The Fill column command can also be used to clear a range of cells in a column.

You can select two options:

In the following example, rows 1 to 100 of column A will be filled with the result of the RANDNORM(0,1) function. This function generates random numbers drawn from a Normal distribution with mean 0 and standard deviation 1. 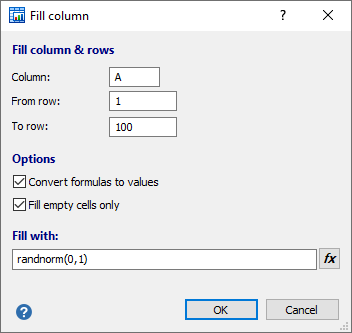 When you save the data then the formulas that you have entered in this dialog box will also be saved in the MedCalc data file, so you can easily re-use them at a later stage.

The Fill column command can also be used to clear a range of cells in a column, by letting the Fill with field in the dialog box blank.

Some examples of useful formulas are given in the following table.

You can convert a continuous variable into a dichotomous variable by filling a column in the spreadsheet with an IF function.

The general format of this function is:

E.g. you have a variable AGE, that you want to convert into codes for two age groups, code 1 for age less than 30 years and code 2 for 30 years or more. You can create a new variable by entering the foluma

in the "Fill with" field of the Fill column dialog box shown above.