Cox regression (or Cox proportional hazards regression) is a statistical method to analyze the effect of several risk factors on survival, or in general on the time it takes for a specific event to happen.

The probability of the endpoint (death, or any other event of interest, e.g. recurrence of disease) is called the hazard. The hazard is modeled as:

By dividing both sides of the above equation by H0(t) and taking logarithms, we obtain:

We call H(t) / H0(t) the hazard ratio. The coefficients bi...bk are estimated by Cox regression, and can be interpreted in a similar manner to that of multiple logistic regression.

Suppose the covariate is continuous, then the quantity exp(bi) is the instantaneous relative risk of an event, at any time, for an individual with an increase of 1 in the value of the covariate compared with another individual, given both individuals are the same on all other covariates. 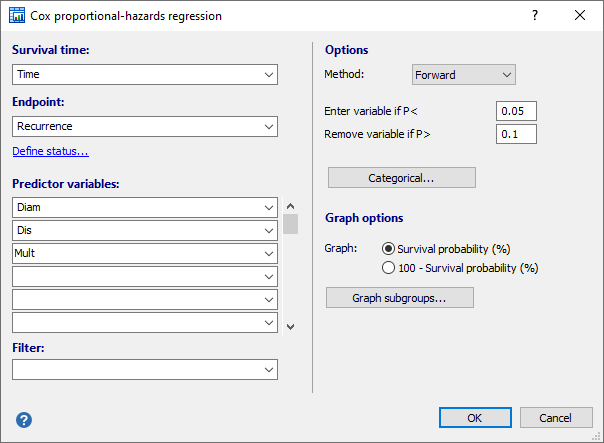 Survival time: The name of the variable containing the time to reach the event of interest, or the time of follow-up.

Predictor variables: Names of variables that you expect to predict survival time.

Filter: A filter to include only a selected subgroup of cases in the graph. 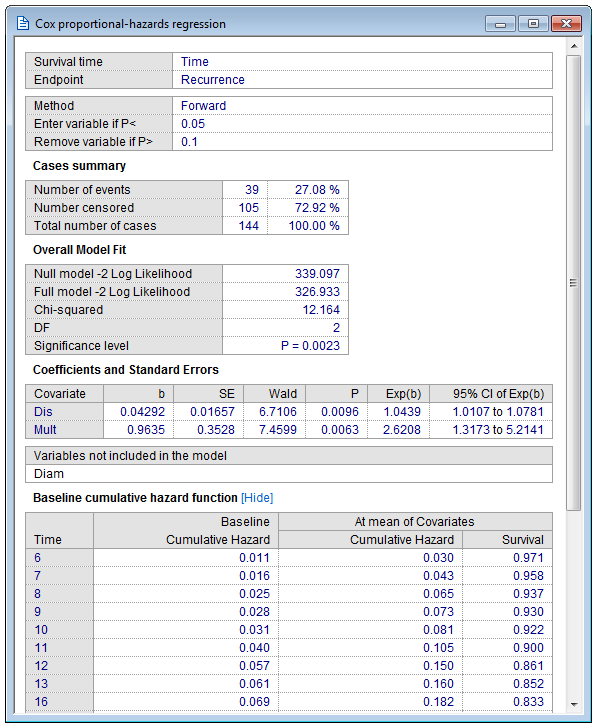 The Chi-squared statistic tests the relationship between time and all the covariates in the model.

Using the Forward selection method, the two covariates Dis and Mult were entered in the model which significantly (0.0096 for Dis and 0.0063 for Mult) contribute to the prediction of time.

Variables not included in the model

The variable Diam was found not to significantly contribute to the prediction of time, and was not included in the model.

The baseline cumulative hazard can be used to calculate the survival probability S(t) for any case at time t:

where PI is a prognostic index:

The confidence interval of Harrell's C-index is calculated using the modified τ method according to Pencina (2004). 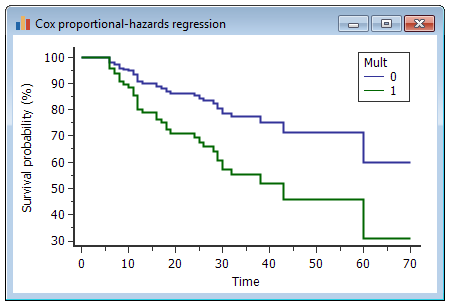 If no covariate was selected for Graph - Subgroups, or if the selected variable was not included in the model, then the graph displays a single survival curve at mean of all covariates in the model.

Based on the work of Peduzzi et al. (1995) the following guideline for a minimum number of cases to include in a study can be suggested.

For example: you have 3 predictor variables to include in the model and the proportion of positive cases in the population is 0.20 (20%). The minimum number of cases required is