Performs an F-test to compares the known standard deviations of two independent samples.

This test is not performed on data in the spreadsheet, but on statistics you enter in a dialog box.

Comparison of two standard deviations is performed by means of the F-test. In this test, the ratio of two variances is calculated. If the two variances are not significantly different, their ratio will be close to 1. 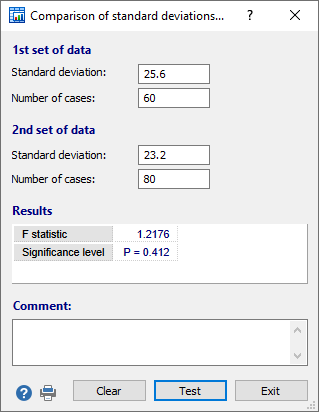 In the dialog box, enter the two standard deviations that you want to compare, and the corresponding number of cases. Next you click Test to perform the test.

In the F-test (or variance ratio test) the square of the standard deviations is calculated to obtain the corresponding variances. If the two variances are not significantly different, then their ratio will be close to 1.

When the calculated P value is less than 0.05 (P<0.05), the conclusion is that the two standard deviations are statistically significantly different.

This textbook is intended for medical researchers and includes the design of clinical trials and epidemiological studies, data collection, summarizing and presenting data, probability, standard error, confidence intervals and significance tests, techniques of data analysis including multifactorial methods and the choice of statistical method, problems of medical measurement and diagnosis, vital statistics, and calculation of sample size.